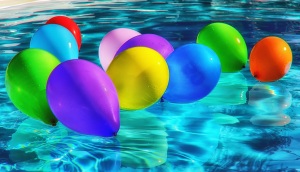 Confession… I’m colorblind. And before you ask, no, I don’t just see in black and white like a dog or a shark or something. I see colors, just not the same ones everyone else sees. Or so I’ve been told. It hasn’t really been a big problem, except for those middle school geography tests that asked questions like, “name the country in red?” Those would always bring on a mini-crisis mode while I nervously stared at three different countries that looked like they might be red. It was pretty traumatic for an introvert kid that didn’t want to raise his hand and ask for help.

But, thankfully, no one pulls out the color-coded maps on me anymore. So, I’ve adjusted quite well to life as a color-challenged adult. Ironically, I’ve had quite a bit of success as a graphic designer. Apparently, knowing exactly what everyone else sees when they look at your art, isn’t a prerequisite to making great art. It has its challenges, but I ‘ve learned a few things along the way. Like, I know I’ve got to run my colors by someone with fully functional eyes to know if they actually look like what I think they look like. Erin’s pretty used to it by now. It usually goes something like this:

Me – What do you think about the blue here?

Her – You mean that purple.

Me – Uh…what would you think of it if it was blue. Would that work with that orange?

Me – That one (pointing confidently).

Her – That’s not orange, it’s a light brown.

You get the idea. It’s a fun game we play.

Last year, I found out about these color-blindness correcting glasses. There’s a bunch of videos on YouTube with people putting them on for the first time and freaking out about how green the grass is or breaking down in tears about the color purple. I watched them enviously. I want to see purple… like, real purple.

Fast-forward a while – Erin gets a few people to chip in and gets me the money to buy the glasses for my birthday. Woo-hoo! I had to take some online tests to see what kind of glasses I need. I have red-green color blindness which means that my red cones are not receiving enough red, and my green cones are over-compensating by pouring excessive green into whatever I’m seeing. At least, that what the internet seemed to say about it. Anyway, the glasses are supposed to correct it by screening out certain color ranges and letting in more light from others.

A couple weeks later, after much anticipation, the big day came. The glasses had arrived. I open the box and pulled out the vibrant colored balloons that they give you to check out after you put them on. I pulled out the case and held them in my hands and felt…nervous???

Enter the conversation in my head :

Assertive voice in my head -“Why are you scared bro? Don’t you want to see color?”

Slightly less assertive voice in my head – “I don’t know? I always felt like I was seeing color. I’ve never seen any different. What if it looks really different? What if I don’t like it? Even worse, what if I do like it and I realize what I’ve been missing out on and then I know that I can never actually experience it unless I’m wearing these stupid sunglasses. Assertive voice in my head, do you know how much of a tool we would look like if we were wearing sunglasses around indoors everywhere? We can’t be that guy?!?!?!”

But, we blew up the balloons anyway, and the family gathered around and I put on the glasses…

Everything looked roughly the same but darker. Like I had sunglasses on indoors… because I did.

It turns out the glasses don’t work for everyone. And even for the lucky ones that they do work for, they usually don’t work right away. It usually takes hours or even days for your brain to adjust to the signals it is receiving. The company told me to give it a week. A week of wearing sunglasses indoors (like a tool) for a few hours a day to see if it starts to get better.

It never got better. And to be honest, I was only a little disappointed. The slightly less assertive voice in my head was relieved.

The whole experience was actually strangely familiar. I’ve walked through those feelings before, not because of magical color glasses, but because I had come face to face with something that challenged one of my unspoken assumptions. Something I had always believed to be true about the world, about myself, or about faith, but had never thought critically about.

Exploring new ideas takes discipline and bravery. Discipline, because you need to actually take the time to investigate things all the way through and not simply change your view because of one challenging thought. And bravery, because once you know things are different from what you’ve thought, you can’t un-know it. You can’t unsee what you’ve seen. You must either move forward making changes because of this new knowledge or you can choose ignorance and pretend you just don’t know. But that can only work for so long. You’ve taken Morpheus’ red pill. You’ve peeked behind the curtain and seen that the wizard is merely a man. You’ve seen the color purple for the first time and know that whatever you saw before was less-than-purple.

That’s the danger of learning, of poking the box, of challenging assumptions you’ve always taken for granted. That’s probably why most people don’t do it. It seems easier to live in the colors you’re used to, even if you know they’re not quite as vibrant as they could be.

Any other colorblind folks out there? Make your presence known. We can start a club! We’ll get together, watch black and white movies and talk about how cool orange probably looks.

2 thoughts on “Colorblind | Thoughts on challenging our assumptions”