I have a theory about friendship. I think we’re drawn to certain people, not just because we like certain things about them, but also because we like the way we are when we’re with them. You know how some friends bring out the funnier side of your personality, while others bring out the adventurous side. You may even have a friend that makes you feel smarter when you’re with them…by the way, you’re welcome. Anyway, I think all friends have the potential to change you in some way when you’re with them, that’s what makes friendship such as powerful force. But there are some friendships that run so deep that they fundamentally change who you are forever. They impact you on an irreversible level. So that for the rest of your life, whether you ever see them again or not, you are different because of them. This is a story about two of those friends.

Paul and Ben were very different from me. They were both remarkably outgoing and seemed to enjoy having a captive audience. Later, I would realize that Ben was actually more of an introvert than I thought and could only keep that kind of thing up for a little while before He would need to withdraw and recharge a bit (something, I’m all too familiar with). Paul, on the other hand, could keep it going indefinitely. I’ve seen him single-handedly entertain a crowd for about two solid hours with, what could only be described as, an impromptu stand-up routine. He was much more of a risk taker than I was, which wasn’t too difficult to achieve. Honestly, when I first met them, during that first week of our Freshman year at Liberty U, I didn’t like them very much. Which is probably true of almost all of my closest friends. Weird, right? I think the things that made us different, made me uncomfortable and maybe even a little jealous. In an ironic way, they are the same things that I would grow to love about them in the years to come.

The following year we were roommates in the on-campus dorms. Paul was always trying to find ways to “make memories.” To do things we would one day want to tell our kids about, which led to some rather bizarre ideas, including the umbrella tree. The umbrella tree was a spontaneous art project inspired by an incredibly windy and rainy day. Hundreds of umbrellas that had been blown inside out and broken were lying all over the campus. It was kind of hilarious. Paul thought it would be great to hang up a ton of them in a really prominent tree alongside the main road through campus. It was a lot more work than I thought it would be and took the better part of our day. But it was worth it, since our tree actually made it in the university newspaper, an art student’s photography project and even earned a threatening announcement at Convo the next day about defacing school property. It was definitely memorable.

One cold morning we walked out of class and Paul saw a snow-capped mountain off in the distance and immediately decided that we had to go there. He had grown up in South Florida and had never seen snow before, at least not real, put on your boots and waterproof pants kind of snow. So, the three of us drove into the mountains until we reached the snow. We played like little kids for hours on that mountain. Throwing snowballs, making snow angels and, I think I even remember an attempt at a snowman.

I could probably fill a couple books with stories of spontaneity from those memorable years. But the most strikingly vivid memory of all was the night of the meteor shower. That morning we had heard there was going to be a meteor shower starting around midnight and that the sky was supposed to be really clear. It was one of those once-in-a-lifetime kind of things.

“Wouldn’t it be awesome to watch the meteor shower from the Peaks of Otter?” Paul said.

“Yeah, that would be awesome!” I said, not realizing what I had just committed myself too. 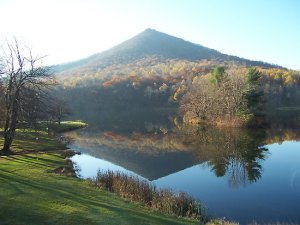 There were a ton of difficulties with this plan. The meteor shower wasn’t going to start until around midnight and wouldn’t be at it’s most visible point until around 1:30 in the morning. And since Liberty had a midnight curfew (yes, I went to a college with a curfew :-p) we were going to have to figure out a way to be in our rooms at midnight and then somehow get off campus with a car to get there. Not to mention, the hike to the summit of Sharp Top, one of the “Peaks of Otter” in the Blue Ridge Mountains, was about a mile and half long and quite steep. I had probably made the hike at least 4 or 5 times before, but doing it in pitch black darkness was going to be a completely different experience.

The curfew thing turned out to be pretty easy. We just made sure we were seen by our RA in the dorm around midnight and then made our way off campus to the car we had parked there earlier in the day. I don’t normally advocate this kind of dishonesty, but in pursuit of such an epic experience I don’t mind. The three of us loaded into Paul’s Mercury Topaz and took off for the Peaks. When we got there it was cold. Very, very cold! It was about this point when I realized how potentially stupid this plan was.  But I kept my pessimism locked away, pulled out my flashlight and started up the trail.

I think I hit my shins on about a thousand rocks and tree roots that night. I remember being worried about stepping on a snake or something. That is, until Ben reminded us about the potential of mountain lions and black bears that stay away from the busy trail during the day but probably don’t have the same fears after midnight. That was a bit concerning, but to be honest, I felt pretty confident I could take a bear if I had to. They’re so furry and soft. And since cats have always seemed to like me, I wasn’t realIy worried about that either. I was still more worried about the snakes. 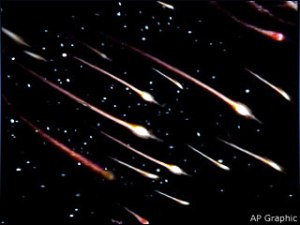 If you keep a good pace it’s normally a little over an hour to hike to the top. Moving slowly through utter darkness with a couple flashlights took a bit longer. But we reached the top sometime around 2:30 and the meteor shower was in full effect. We laid there on that mountain for about an hour staring at those streaks of light. They looked so close you could touch them but also seemed so far as to make you feel infinitely small. We were freezing cold, exhausted and very much exposed to a mountain lion attack. But there was no place on earth I would have rather been. It was surreal.

For the trip back down we decided to walk the road that the buses take. It was twice as long but it seemed like we were far less likely to trip and slide down the side of the mountain that way, so we went with it. We had the most personal and revealing conversation we had ever had that night coming down that mountain. You know, the kind of talks you have when you’re descending a mountain at 4am in complete darkness.

We drove back to Lynchburg and slept in the Topaz at the Dollar Theatre parking lot for about an hour and a half. By then the morning classes were starting so we made our way back onto campus and crashed in our dorm until lunchtime. It was one of the most memorable nights of my life.

I thank God for the friends that He has brought into my life. Especially the ones, like Ben and Paul, that have pushed me out of my over-cautious and introverted comfort zone and made me a better and more balanced person. I needed that. I’ve been blessed to have a lot of these in my life. In fact, I married my favorite one 🙂

3 thoughts on “Meteor Showers At Midnight :: Thoughts on friends that change you…”