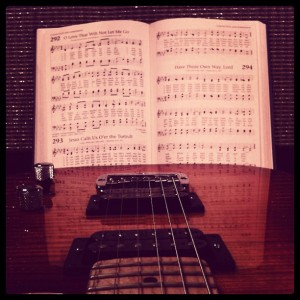 Contrast is very trendy right now. Particularly the contrast between the very old and the very new. I’m sure you’ve seen those design magazines that have a picture of an old, rustic, paint-chipped door behind a brand new, super-sleek, modern chair. Or a 1920’s typewriter sitting on top of table from Ikea. There is something about this contrast that’s appealing to us. At first I thought it might be the irony that made it attractive but now I’m starting to think it’s more significant than that.

You can see this same type of contrast in churches these days. And I’m not talking about 50-year-old pastors in skinny jeans, although you can see that too…unfortunately. I’m more referring to the resurgence of old hymns being sung in non-traditional and predominantly younger churches. Some are even embracing traditional liturgical worship practices (albeit these typically look significantly different from their liturgical predecessors). As a worship leader in my own church, I love to incorporate hymns and readings into our worship and it’s not simply because it’s becoming trendy to do so. We’re not trying to play some awkward middle ground between the people who like old music and those who like new music. We sing both old and new songs in our worship gatherings because it’s immensely helpful to our proper understanding of worship, of God Himself and of His church.

Church music has always been divisive, simply because music itself is divisive. People generally settle into a style that they enjoy and they don’t particularly feel a need to expand their taste to include a wider variety. And church is basically the only setting where people from various generations and music tastes are forced to come together and enter into one unified musical experience…enter division. Often this has resulted in a terrible compromise with music styles (traditional or contemporary) that no one likes and we all simply endure because it’s supposed to be good for us…like brussel sprouts.

There are many churches now, as there always have been, that believe you should only sing songs that are old. They are very resistant to new songs and as if God had stopped inspiring people to write new songs long ago. By doing this they send a subtle, yet dangerous message that God used to be very active and awe-inspiring, but now He is nowhere to be found. On the flip side of this argument are churches who only use new music and have thrown out several centuries worth of great songs like a 500-year-old baby with the bath water. They are sending an equally damaging message that God is fresh and new and we are the first ones that have ever experienced him. Which makes Christianity seem shaky and experimental. Both positions are historically and practically naïve.

Most people use the word “hymn” to speak of pretty much any song that was published into a songbook prior to 1960.  And most misunderstand hymns to be one genre of music, believing that all hymns were written in one style and it’s the only style that had ever been used in church until the 60’s and 70’s came and the hippies jacked it up. This simply isn’t true. The typical hymnal contains songs written anywhere from the 13th century (i.e. “All Creatures Of Our God & King”) through to the 1950’s (some even go more modern that) and covers a massive array of musical styles, most of which were progressive in their own time. Some were even quite controversial because they were so different from the established norm. Many hymn writers pushed musical and even lyrical boundaries well beyond what most people in the church were comfortable with.

Take the Doxology for example. This song was actually the last stanza of a hymn called “Awake My Soul, and With The Sun” written by Thomas Ken in 1674. At the time, most churches believed that it was blasphemous to sing any songs in worship that were not directly from the scripture itself, primarily the Psalms. Ken wrote this hymn and many others to be used privately by the boys he instructed at Winchester College in their dorm rooms…alone. How ironic that the most popular song for corporate worship, probably in the entire history of the church, was so controversial it was never meant to be sung in public.

Isaac Watts, who wrote his first book of “Hymns and Spiritual Songs” when he was about 20, was viewed as a religious non-conformist because of the ways in which his theology was a little out of step with the Church of England at the time. Watt’s introduced “original songs of the Christian experience” into Protestant worship. That is, poetic lyrics that are based on the Bible and Christian experience but not direct quotations. Watts published some 750 hymns, many of which are still in use today. He was an innovator and a reformer in his time.

Charles Wesley, brother to John Wesley, is said to have written around 7,500 hymns, many of which were never published. After his conversion in 1738, he was barred from preaching in London churches because his style made church officials uncomfortable. He and his brother John became itinerant preachers and began a controversial movement that became known as Methodism. The movement was passionately evangelical, bringing preaching and hymn singing outside of the church to the people who weren’t going inside.  Charles wrote songs in the language of the people of his day so that they could understand, using musical styles that were familiar to them.

These are just a few stories to make the point that many of the writers of these songs were progressive, and even controversial, in their time. They wrote differently, in both style and in lyric from what was the previously accepted norm. The truth is, most of us grew up hearing all of these songs performed by an out-of-tune upright piano, an awkwardly small choir and a passionate, yet not-so-competent music leader. And because they all sounded the same, we thought that they were the same. It’s like looking at a book of old photographs and assuming that everyone back then must have been two-dimensional and small because that’s the way they look in the pictures.

Those songbooks are musical history books. They represent generation upon generation of saints over the centuries, expressing their worship through songs that were, in some way, indicative of the culture of their time.

And this is not limited to musical style. The lyrical content was influenced by culture as well. Some songs were written in response to doctrinal controversy that existed at that time, as a way of reinforcing, or challenging accepted doctrines of the church. There are times where the culture leaned towards deep intellect and the songs followed suit. There are others where they sought a more emotional experience and the songs likewise moved towards the language of intimacy and closeness. These songs serve as windows into our past.

Music has always been a culturally influenced vehicle. That is not new. Cultural relevance was not invented by Willow Creek, Saddleback, or (insert name of contemporary, mega-church that blew up in the 80’s). Culture is something that always influences us, in positive and in negative ways. For a long time, the  “modern” worship movement (which seemed to be convinced that they were the first generation to discover true worship) was marked by extreme passion, yet most of the songs were rather nominal in their substance. Which is a reflection of the shallow, yet emotionally over-driven nature of our culture.

We all tend to feel like we’ve arrived at some type of complete understanding of what church worship should be. But in reality, we are all simply living out a small section on the vast timeline of church history. We have a certain limited perspective that will shape our methods, practices and even our songs.

This is why I feel it is so important that we bring the ancient into our modern worship gatherings. It gives us a bigger perspective than that of our own culture. It reminds us that we are only a part of a rich and long heritage. It allows those from outside of our culture and time to be our instructors, so we don’t fall into the arrogance of believing we are the first generation of believers to “get it.”

We are not the first to tread this ground and we will not be the last. These songs are breadcrumbs left by those who have gone before. Men and women who reached the end of their lives still convinced of these truths and confident of their hope in Christ, many who passed on from this life with these very songs on their lips.

There is something overwhelmingly comforting about that to me. I think that’s why we like to see the old and the new together. There is something grounding about the juxtaposition of the ancient and the modern. It reminds me that the kingdom of God is bigger than me and my tiny, little speck on the timeline of history. I need to be reminded of that sometimes.

5 thoughts on “Juxtaposition :: Thoughts on using hymns in modern worship…”