We just got back from a spontaneous two-day trip to the beach. It was a desperately needed break from our other responsibilities to focus on our too often neglected, yet critically important, relationships within our own family. One of my favorite memories from the trip revolved around the classic, family activity of sandcastle building. Which. I’m sure, has to be centuries old. Maybe Abraham was rockin’ some crazy sweet sandcastles with Issac back in the day; they certainly had no shortage of sand. Anyway, I had just started in on, what was sure to be the definitive sandcastle, one that would make all rival castles look like sand condos, when Kate (2 yr old) decided she would do some remodeling. Much like Godzilla remodeled Tokyo.

So, like the gracious and loving father I am, I “gently encouraged” her to play somewhere else while Gavin and I built this castle. A few minutes later, after I had put down two large towers and began to work on placing the third, Gavin decided to improvise by placing a new tower on the top of one of the existing ones…AHHHHHH! And the second castle shared the tragic fate of the first. So, I made both kids go sit by their Mom and told them “This is supposed to be a FUN family trip! Now sit over here and don’t move a muscle while Daddy builds you a sandcastle that you will LOVE!” Well, not really… but the thought did cross my mind. I mean, what do kids know about sandcastles anyway. I could built them the best freakin’ sand castle this beach has ever seen if they would just stay away from it and not touch it, breathe on it, or look at it.

Sometimes I feel like my life is like that sandcastle. I look around at others people’s castles and see their huge towers and spires looming over my small decrepit, broken down castle and  sandcastle envy begins to settle in. I start thinking that I should have a castle like that. I should have that career, that level of influence, that car, that house. I should have that kind of life (I mean… for my family, of course). And some voice inside of me tells me that I probably could, if I just had more time and energy to focus on it. And all of a sudden, my responsibilities to my family begin to look like major frustrations that are holding me back from my potential. And my kids seem more like obstacles to be overcome than blessings to be enjoyed. And it’s at this point, by God’s grace, that I usually snap out of it and bring my feet back to the ground, and recognize how much my family enriches my life and how my kids are treasures to be cherished and not burdens. And I am unbelievably grateful for those moments of awakening because that type of thinking, if left unchecked, is poisonous. And it has derailed more families and shipwrecked more men than I could count. And I don’t wish to join them.

You know those huge, intricate and impressive sandcastles, usually built as a part of some competition or something. There is one thing you can be certain they all have in common. No kids helped build them. In fact, there were probably no kids allowed anywhere close to them. Each one was built by an adult who has devoted an inordinate amount of time to mastering a child’s game. Which is really kind of sad and ironic. Kind of seems like missing the point a bit. 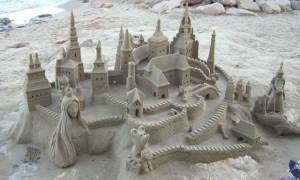 You can do life like that too. You can build yourself a huge and impressive castle, complete with all of the bells, whistles and upgrades you could imagine. But eventually it will be washed away by the tide. Because, after all, its just sand. And all you will have left is broken relationships with a neglected family who sat on the sidelines for years while you built a life “for them to enjoy.” Now, I’m not saying that ambition is wrong, but when your 5-year plan trumps your family you are certainly running towards a disaster. Those plans are probably best written in pencil if you want to be a real man. A real man can build a responsible career and lead his family by providing for them financially, physically, emotionally and spiritually. And that is going to require some flexibility.

There is a beautiful naiveté to life before kids. I remember feeling constantly judgmental towards all these people who weren’t doing anything great and noteworthy with their lives. It just seemed like none of them were passionate enough about God, or anything for that matter. I was judging their puny sandcastles, while drawing up the architectural plans of my own soon-to-be sandcastle that would be truly spectacular. Turns out most of those plans were something of an illusion. Like a mirage, that I could easily waste much of my life chasing after. Or I could welcome those little toddler feet as they kick my well-intentioned castle to the ground and begin work on a new one. Sure, it won’t turn out quite like what I had drawn up in my mind. It won’t have the smooth edges and impressive towers that some others may have. But it will certainly be beautiful and it will be ours, because we built it together. And I wouldn’t trade it for any castle on any beach in the whole world.

5 thoughts on “Castles Made Of Sand :: When Parenting Meets Life-Planning…”