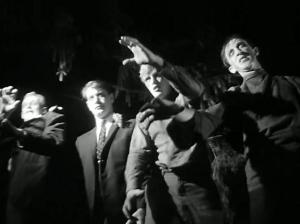 The last week in my house played out much like “Night Of The Living Dead.” One by one, each member of my family fell victim to a horrific stomach virus that left them vomiting and comatose. By Thursday, I was the only one left and I could feel it closing in on me. But, it never got me. I survived! It’s a testament to my incomparable immune system, strengthened through years and years of training and exercise. You should always be sure to take your immune system out for walks and maybe do some light, weight training with it. That way you don’t get sick.

Anyway, all weekend everyone kept asking me how I was doing and I’d tell them I was feeling fine, which wasn’t totally true. I have actually had crazy sinus congestion and this ridiculous cough for almost 3 weeks.  So, I was sick, but I wasn’t AS sick as everyone else in the family. So, comparatively I was fine.

Measuring ourselves against others is so common in the human experience it’s hard to even realize when it’s happening. It’s become normative, like breathing or something. We don’t even have to think about it, we just do it.

Jesus told a story once that was similar to mine, only much better,  “Two men went up to the temple to pray, one a Pharisee and the other a tax collector. The Pharisee stood by himself and prayed: ‘God, I thank you that I am not like other people—robbers, evildoers, adulterers—or even like this tax collector. I fast twice a week and give a tenth of all I get.’ “But the tax collector stood at a distance. He would not even look up to heaven, but beat his breast and said, ‘God, have mercy on me, a sinner.’ “I tell you that this man, rather than the other, went home justified before God.”

It’s easy to feel like your doing well physically, emotionally and, in particular, spiritually when you judge your status by comparison. We all want to feel good about ourselves and you can always find someone that’s doing worse than you. Just the other day a few of us were speaking with a lady who was a slave to alcoholism. It was painfully awkward to listen to her justify her actions and shift the blame for her condition onto others. It was one of those situations where, compared to some of her friends, she was really doing pretty good, but to us it was obvious that she had lost control. As we were leaving I could hear a small voice inside of me saying, “I could never let myself get to that point…” And then I remembered this story and I was hit upside the head with the truth… I was already at that point. I just had a different master.

The thing about the Pharisees was that they had turned the worship of God into a way to feel more secure and solidify their position as authority figures. It gave them a scale to measure up against others and always come out on top. Their obedience was no longer about worshiping God, but themselves. In the story Jesus told, both men were guilty of the same thing, idolatry. Which simply means, putting something other than God in the place that is only meant for God. The tax collector worshiped money. The Pharisee worshiped himself. The difference was, one man knew it and pleaded for mercy and the other was unaware and was therefore in a far more dangerous position.

Comparative righteousness is not righteousness at all. It’s like patients in the ICU walking out of the hospital because someone with a more critical injury just showed up. Some people have more obvious scars but we have all been damaged by the war. Just because you can hide yours better than someone else can doesn’t mean they’re not there. Just because your idols are culturally acceptable, maybe even celebrated, doesn’t mean they aren’t robbing God of the worship that only He deserves and robbing you of the joyful life that God offers.

If you really feel like you need a measuring stick to compare yourself to, try Jesus. He’s the only standard of what an acceptable, righteous life before God looks like. Intimidating? It should be… because it’s impossible to measure up. The beauty of the gospel is that the measuring stick has been thrown out and Jesus’ status has been freely given to us. Do you realize how huge that is? Allow me to say it again… God has thrown out the measuring stick! He’s not counting deeds. There is no tally of right and wrong that determines your standing with Him. We are the ones who always keep pulling the stick back out again. Always wanting to prove ourselves. Never content to simply rest in the grace that God offers and just be healed.

Erin and the kids have all gotten over the virus they had and are all feeling much better. I, on the other hand, am coughing my head off as I type this. Maybe I should go see the doctor.